During a recent visit to Vancouver, Washington State Treasurer Mike Pellicotti talked about the need for a Futures Fund. It was an idea he pushed in the legislature that neither the Senate nor the House allowed to get out of committee.

His proposal was to “invest” $128 million of your tax dollars a year into a fund, managed by the people who handle government pensions, and have money available for kids 18-31. For every child born under Apple Health, Washington would allocate $3,200 into an investment pool. Apple Health is our state’s version of Medicaid.

These children could use the money for college or a trade school, following graduation from high school. But the proponents also wanted these funds available for someone to start a business or buy a home. Funds had to be used before the person turned 31. It was expected the $3,200 would grow to about $10,000 over 20 years according to Pellicotti.

The money won’t even cover a down payment on a home. It won’t pay for one year at Washington State university ($28,000) or University of Washington ($29,000) presently. People over age 35 are more likely to be successful in starting a business, so this might be setting people up for failure.

Your state legislature, following the McCleary decision, has doubled the amount of money allocated for K-12 education in our public schools. The K-12 education spending consumes just over half the state’s General Fund budget. That equates to over $18,000 per year per student.

Why would legislators want to create another government bureaucracy to manage and oversee a new government program, when the state schools are failing to deliver the states “paramount duty”? Why wouldn’t legislators try to fix our current schools, so they deliver better results?

A truly caring legislature would have passed HB 1633, a bill sponsored by Representatives Vicki Kraft and Jim Walsh to provide families with up to $10,000 to access private tutors and other resources to help children catch up in school. Instead, Rep. Sharon Tomiko-Santos blocked the bill in committee, where it died on March 10th.

Where is the value in our current K-12 education system?

The legislature allocated over $27 billion for public schools in 2022. That was expected to cover 1.06 million students. Over 13 years of education (kindergarten through 12th grade), the state would spend over $230,000 at current rates. 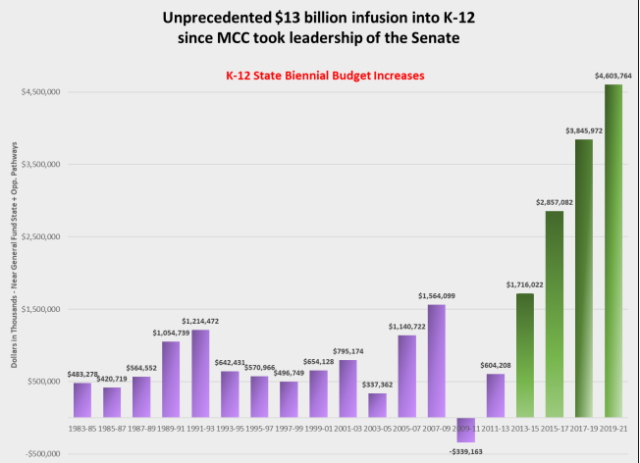 In Washington state public schools, only 59 cents of every dollar reaches the classroom, reports Liv Finne of the Washington Policy Center, This is based on the accounting category ‘Activity of Teaching’.

From 2002 through 2020, Washington state increased education funding by double the national average, according to a Reason study.

There has been a huge exodus of students from the public school system during the pandemic. Over the last two years, more than 41,000 families have pulled their children out of Washington’s public school system, according to a recent report by Crosscut.

Two people know what’s best for a child’s education – the parents. We must fix our failing state public schools by giving parents the tools they need to ensure their children get the best quality education possible.

We don’t need new government programs like the Futures Fund, when current programs are failing over half of our children. After all, it’s supposedly the legislators “paramount duty”. What were Rivers and Harris thinking? Kraft and Walsh had a much better idea to help children and their parents. Sadly, Harris chose not to cosponsor that bill in the House, and no companion bill in the Senate.

We can and must do better for our children!