On Tuesday evening, the Clark County Republican Party (CCRP) Central Committee met for its quarterly meeting. At the top of the agenda was endorsing republican candidates who appeared to have been in the “top two” of the August 2nd primary election. This allows them to advance to the November General Election.

First recognized was republican Joe Kent who had succeeded in ousting Congresswoman Jaime Herrera Beutler. Kent gave a very unifying speech, after which he asked for and received unanimous support and endorsement from the CCRP.

Other candidates sought the endorsement of the republican party, including legislative candidates, and for the sheriff and county council.

Unbelievably, Greg Cheney who serves as the CCRP Treasurer did NOT seek the support and endorsement of the republican party. Why?

Candidates were given the opportunity to lay out their platform, thank supporters, and seek further support. However, Greg Cheney chose to remain silent?

This is not the first time Cheney has avoided the opportunity to lay out his platform and seek the support of Precinct Committee Officers (PCOs) in Clark County. On July 18th, the 17th and 18th Legislative District PCOs held a candidate forum. There was a wonderful series of questions and issues discussed, including questions posed by the PCOs.

Conspicuously absent was Cheney (and McClintock). Why wouldn’t they be seeking the support of fellow republicans? Why wouldn’t they want an opportunity to hear and respond to concerns of people they seek to represent?

A PCO who attended the CCRP meeting noted Cheney’s failure to seek an endorsement. “Is Cheney really a closet democrat?” he asked. He reminded me of a recent event where Cheney was photographed with liberal politicians, including Annette Cleveland, Temple Lentz, Sharon Wylie, and Ty Stober. Perhaps he identifies more closely with them than the conservatives who make up the majority of Clark County voters, it was suggested. 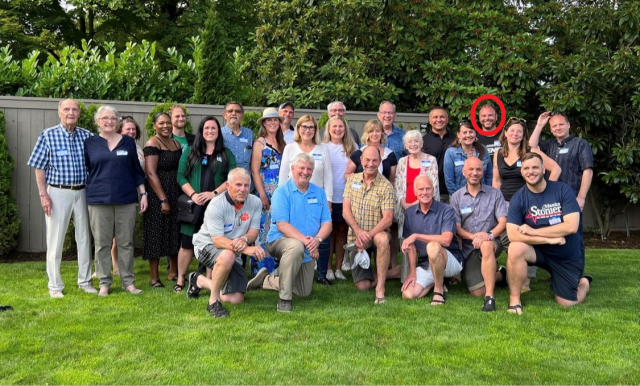 I have been a proud republican all my life. For the past decade I have been involved in numerous levels of the Clark County republican party. Yes, I am a proud, conservative republican.

I fought the Columbia River Crossing. I served as campaign manager for Bill Turlay’s Mayoral run against Vancouver’s corrupt Tim Leavitt. I helped Liz Pike and Vicki Kraft in their campaigns for the state legislature. I have supported David Madore and Tom Mielke in their efforts to get elected and reelected to the county council. I have worked to get Karen Bowerman and Gary Medvigy elected to the county council.

I proudly stand for conservative values, for our state and federal constitutions, and the citizens of Clark County. I am a proud member of the Clark County Republican Party.