The Interstate Bridge Replacement team briefed the 16 legislators from Oregon and Washington on Monday, Dec. 12th. They revealed cost estimates have gone from a $3.2 billion – $4.8 billion range provided two years ago, to a new “estimate” of $5 billion – $7.5 billion. The explanation according to program administrator Greg Johnson was “inflation”.

Further revealed was new, lower transit ridership projections. Earlier projections used to justify extending MAX light rail for 3 miles into Vancouver, called for 26,000 to 33,000 average daily transit riders on the I-5 corridor. The new “updated” numbers showed only 11,000 average daily riders for the project. Even that is unbelievable, as both C-Tran and WSDOT numbers show less than 1,000 daily bus passengers crossing the I-5 Interstate Bridge on an average day.

The project costs were for a “conceptual design” only. No specific cost break downs were provided, much to the chagrin of some legislators and many of the citizens who spoke out against the project during public comment.

Furthermore, the project continues to try and negotiate their “bridge too low” for marine river traffic. The Coast Guard has requested a bridge with at least 178 feet of clearance. They would prefer ‘unlimited” clearance, meaning a bascule bridge. Instead, the IBR continues to push a 116 feet of clearance proposal, hoping to negotiate a lower bridge height.

Lars Larson has followed the debacle of the Columbia River Crossing (CRC) and its resurrection. He highlights the waste of roughly $200 million without turning a shovel of dirt a decade ago. The cost of replacing the bridge in the original CRC was $792 million, roughly one quarter of the $3.5 billion price tag. He now wonders if eliminating light rail would save up to a third of the cost now. He and I discuss what was revealed on his Tuesday, Dec. 13 show.

TheLarsLarsonShow · John Ley – With transit riders down should we spend 7.5b to add light rail to a single bridge?

Economist Joe Cortright at the City Observatory shines the light of truth on Greg Johnson’s “excuse” that inflation is the cause. No, it is mismanagement and likely incompetence. Cortright estimates only $300 million of the cost increase might be due to inflation, as the original cost estimates were inflated to “Year of Expenditure” by the IBR team.

TriMet is demanding “new revenues” (aka taxes) from residents on both sides of the Columbia River to cover their operations and maintenance (O&M) costs for operating the 3-mile light rail extension into Vancouver. No O&M cost estimates have been provided.

Clark County residents know that C-Tran has provided the only transit service across the Columbia River for decades via their “express” bus service. At one point they operated 7 separate bus lines. C-Tran never asked TriMet or Portland residents to pay for any of their O&M costs for decades of bus service.

In the pandemic, C-Tran ridership declined to 971 average daily riders for both I-5 and I-205 travel. Transit ridership was in decline for over a decade prior to the pandemic. Sen. Lynda Wilson had asked “what does significant transit demand look like” in the spring of 2021, when IBR staff said “if you build it, they will come”. The IBR’s John Willis responded: “None of those (eleven) options fully meet the demand we predict for 2045.”

A recent Transit Development Plan for 2027 predicts C-Tran system ridership will only recover to 75 percent of pre pandemic levels. Even before the pandemic, “Express” bus ridership was minimal across the Columbia River.

WSDOT data for 2021 shows only 4 tenths of one percent of people and trips over the Interstate Bridge were on C-Tran buses. 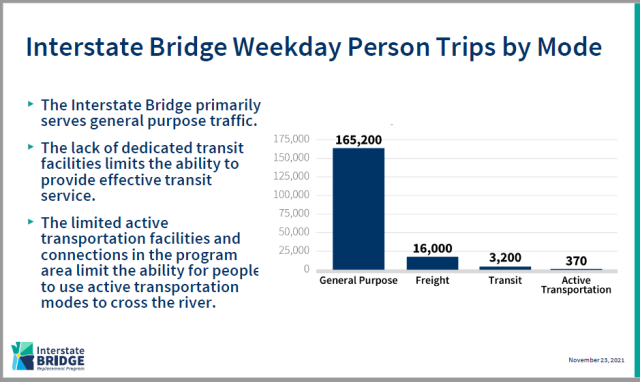 This C-Tran graphic shows the specific decline in their ridership due to the pandemic. You’ll note “Commuter Ridership” at less than 1,000 per day (both I-5 & I-205). 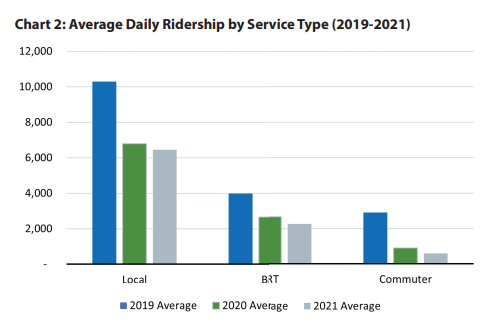